Paul knew the ‘historical’ Jesus without seeing Him, explains Pope 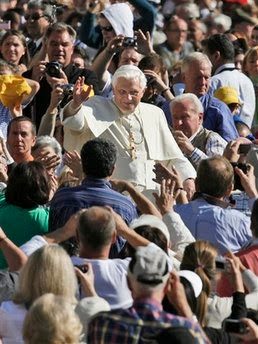 Pope Benedict XVI dedicated today's audience to St. Paul's relationship to the so-called "historical" Jesus. The Holy Father reminded the faithful that for Paul, "Jesus is alive, speaks for us and lives with us."Speaking to the 25,000 faithful gathered in St. Peter's Square, Pope Benedict began his address by noting that St. Paul himself distinguishes two ways of knowing Jesus.In Paul's Second Letter to the Corinthians, he writes, "(E)ven if we once knew Christ according to the flesh, yet now we know him so no longer."To know someone "according to the flesh," the Pope said, means knowing them from the outside: how someone speaks, moves, etc.
And yet, one does not really know a person from mere externals, he explained. The only way to truly know someone else is with the heart, unlike the Sadducees and Pharisees who only knew Jesus superficially.Another example of people demonstrating their superficial knowledge of Jesus occurred after the Transfiguration when Jesus asked the apostles: "What do people say about me?" and "But who do you say that I am?" Those who compared Jesus to Elijah or John the Baptist only knew Jesus from the outside, the Holy Father said.
The Twelve Apostles, on the other hand, thanks to their friendship with Jesus, displayed that they were beginning to know who Jesus really is. Even today, the Pope observed, there are people who do not know every detail about Jesus but have met him.The Pope went on to consider that Paul "is certain not to have seen or met (Jesus) on earth." Paul did, however, know him through the Apostles and the nascent Church.
The evidence for this can be found in Paul's letters, which provide three references to the Pre-Easter Jesus.
Firstly, there are explicit and direct references such as Paul's mention of Jesus' Davidic lineage, the Last Supper, and Jesus' words about the indissolubility of marriage.
Secondly, his letters contain various allusions to the Synoptic Gospels.
Thirdly, Paul's teaching on the Kingdom of God, such as his explanation for the exclusion of boasting, is always faithful to the tradition of the so-called "historical" Jesus.The Pope also pointed out that in his Letters to the Romans and to the Galatians, Paul says that "the baptized can turn to the Father, speak [to him] like Jesus, because they have become sons through the Son." In the pre-Easter tradition the word father, Abba, was familiarly used by children, but not by Jews when they addressed God. On the Mount of Olives, however, "before falling asleep, the disciples heard Jesus call out to his Father.""In conclusion,” Pope Benedict said, “St. Paul does not think of Jesus as a historian would; he does not see Jesus as a figure of the past. He certainly knows the tradition ... regarding His life but does not treat Him as something in the past but as the reality of the living Jesus. ... Jesus lives and speaks with us today. This is the true form of knowing Jesus and the tradition about Him."
at October 08, 2008