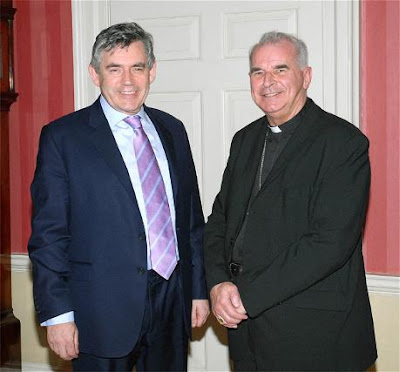 OPEN LETTER TO THE PRIME MINISTER


I write this open letter to you on a matter of immediate urgency, namely tomorrow’s debate in the Lords on the Human Fertilisation and Embryology Bill. Although I was relieved that last week’s debate in the Commons on the Bill did not address the issue of abortion, I remain convinced that the Bill is misguided and certain sections are potentially most harmful.

Among these is Schedule 3 which has never been properly discussed in Parliament. It provides for taking tissue from incapacitated adults and children without their consent for the express purpose of creating embryos for research. It will be debated in the House of Lords tomorrow (Wednesday 29 October) with Government support.

The Bill could allow for the derivation and use of human eggs from the ovarian tissue of aborted baby girls, a proposal which was first aired by the HFEA in 1994. The HFEA public consultation at that time showed that 83.2% of the 9,000 respondents opposed the practice, and even the few in favour underlined the necessity of consent.

Should this Bill become law, removing tissue from incapacitated adults or children, without their specific consent in order to create animal-human hybrid or other embryos would be permissible, as would creating artificial sperm or artificial eggs from bone marrow or even cord blood.
The grotesque implications of these procedures are utterly horrifying. The proposals in this Bill represent a breach of 50 years of ethical medical research. They by-pass the Declaration of Helsinki, the Human Tissue Act, the Mental Capacity Act and the Human Rights Act. Removing parts of people’s bodies without their consent, utterly flies in the face of all BMA and GMC guidance on consent to research.

Such behaviour was last seen under the Nazis. Following the liberation of the concentration camps in 1945, the full horrors of the Nazi’s atrocities were revealed to a shocked world. The hideous savagery of their experiments convinced the civilized world that such practices must be outlawed forever. I am appalled that you are promoting a Bill which seeks, by stealth, to create a regime where extracting tissue and cells from human beings no longer requires their consent or involvement.

I am staggered that you would endorse legislation, which describes the creation of embryos from a person without their consent as 'non-invasive' and which enshrines the concept of ‘presumed consent’ in UK law. This legislation would set a nightmarish precedent, by allowing scientists to experiment on those lacking capacity - in the absence of explicit consent - largely as they see fit.


I urge you to amend Schedule 3 of the Human Fertilisation and Embryology Bill as a matter of great urgency and human decency.

Yours sincerely in Christ

We are catching up with the NAZIS in lots of ways.

We can't move without being spied on,we are completely controlled at all times.

Instances are too numerous to put down here,successive Governments have complete disregard for human life or any treaty.

The Cardinal has hit the nail on the head.
Although I do not live in England I still followed the recommended day of prayer and fasting on the Feast of Ss Simon and Jude. (It is Wednesday here in Australia).
JARay

Would you happen to know where our English Cardinal is, and if he has made any recent statement? In the meantime I am abject, but most grateful to Cardinal O'Brien.

Yes, thank God for Cardinal O' Brien.
Some in my family fall into the 'incapacitated' category-if this bill gets on to the statute,I shan't feel able to trust the medical profession as I have done in the past.My P.P. drew the congregation's attention to this bill a few weeks ago,saying that if we didn't agree with the proposals we could write to our M.P. The use of that 'if' was particularly troubling.

Yet us hope that Christians in England will be better at opposing Nazi measures proposed by their government than were the German Church and the Lutherans. A very few spoke out there, and they are the ones remembered. Have we no bishop like the Bishop of Munster (though even he was silent about the murder of the Jews) or no equivalent to the "Confessioning Church" of the dissident Lutherans?
At least they stopped the killing of the unfit.

They are in league with the biggest fraudsters in history anyway.

If there was any justice the directors of the banks would be held in Guantanamo Bay whilst they were being investigated for the frauds. The government stood aside and egged them on. They have done far more harm than all the Islamic terrorists put together.