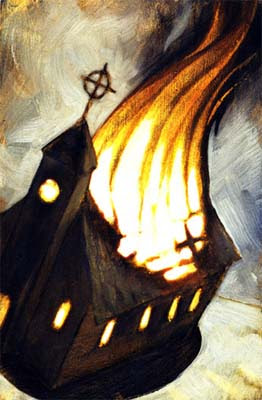 Source During protests by both supporters and opponents of the abortion ship operated by the Dutch group “Women on Waves,” which docked last week in Valencia, Spain, feminist organizations openly called for church burnings and handed out matches to their followers.
The presence of the “ship of death” in Valencia last week led to one of the largest pro-life protests in the city’s history, with large numbers of people voicing opposition each day to the ship’s services, which include bringing women into international waters to undergo abortions according to Holland’s liberal abortion laws.

On October 18, a group of 40 feminists gathered to counter the pro-life protests, which brought out four times as many people. They passed out boxes of matches with the picture of a burning church and the caption, “The only church that brings light is the one that burns. Join us!”

On October 19, the feminists met again to distribute matches but decided to disband after they were overwhelmed by the large number of pro-life protestors who gathered at the port where the abortion ship was docked.
at October 22, 2008

The actions of these people surely must be classified as an incitement to religious hatred. Bra burning has morphed into Church burning. Well, at least we can now see these people and what they represent quite clearly.

“The only church that brings light is the one that burns. Join us!”

Perhaps this is a subliminal request from the feminists that really they would like to be rounded up, put on their horror ship, sent out to sea and the ship then burned. They would certainly then get the light they so desire.

Because feminists around the world are all cut from the same cloth, and a NOW (I think) chapter in New Jersey is 100% the same as an organization in the Netherlands...

I assume Spanish law thinks this sort of behaviour is fine-or were any of these strange people arrested?
But I am very impressed with the Spanish pro-lifers. Good for them and God bless them.

I think the issue of these people seeking to burn churches is rather sensationalist, both in content and presentation. The implication is that all feminists are pro-abortion (indeed, lucille states that they are all cut from the same cloth). This is simply not true; there are many feminists who are completely and ardently pro-life, and I am blessed to count several as my acquaintances.

A feminist is anyone who advocates the "advancement and emancipation of women" (Chambers Dictionary); in this respect I am a feminist, albeit a male one. There is much injustice perpetrated against women today: think of the forced marriages of teenage girls in some communities within the UK let alone what happens abroad.

Unfortunately, the money-hungry, fundamentalist Protestant televangelists in the US began to twist the word "feminist' during the 1990s; theirs is not an example I would hope you seek to emulate.

The arguments of the pro-abortion lobby are vapid as well as morally, socially and psychologically bankrupt. Abortion is an evil; there can be no compromise as we both well know. Yet, if we are to fight for the sanctity of life - and fight we must - it needs to be done soberly, calmly, methodically and passionately - but without harshness towards our adversaries. Ranting and raving only entrenches pro-abortionists in their views; besides, such an approach is surely not of Christ.

Some of the most powerful weapons in our struggle to bring about an increased belief in the sanctity of life are the wonderful medical advances of recent years: these clearly show that the embryo/foetus is NOT some lump of flesh. Pro-abortionists do not believe in the sanctity of life as we do; we must accept that reality, and engage them with words they do understand - but always with a firmness that is loving and compassionate.

We will certainly not bring about conversions by throwing around generalised comments or condemning abortionists to be "..sent out to sea and the ship then burned"; can one possibly imagine Christ advocating such a move?

By way of illustration: A member of our community was once engaged with some fundamentalists in a discussion regarding prayer for the departed. His main opponent shouted loudly and eventually condemned him to hell for his "papist superstitions" before storming off, closely followed by one of the others. The remaining youth said , "I agree with him, but he had violence in his heart while you spoke strongly but with love. I’d like to hear more." As of this writing, that remaining person has been a religious for several years.