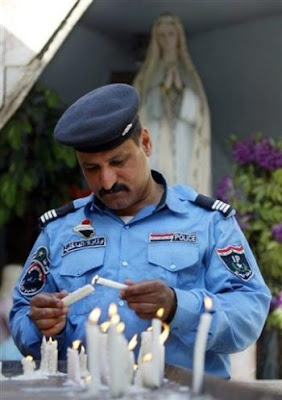 (AFP) — Iraq dispatched nearly 1,000 police to the northern city of Mosul on Sunday to protect Christians fleeing the worst violence perpetrated against them in five years, the government said.

The reinforcements were deployed from midnight on Saturday along with two investigation teams, one security and the other criminal, sent in to probe the incidents, he said.

Nearly 1,000 Christian families have fled their homes in the city since Friday, taking shelter on the northern and eastern fringes of Nineveh province after at least 11 Christians died in attacks since September 28.

At least three homes of Christians were blown up by unidentified attackers on Saturday in the Sukkar district of Mosul, which is regarded by US and Iraqi security forces of one of the last urban bastions of Al-Qaeda in Iraq.

Mosul military command spokesman Khalid Abdul-Satar said he did not know who was behind the violence but pledged to protect the Christian community as security forces started patrolling the streets.

"We told the Christians through their churches and priests that we are ready to provide security to any house or individual that needs our protection. We have enough forces to do that," he said.

At the Vatican, Pope Benedict XVI condemned the violence perpetrated against Christians in both Iraq and India.

"I invite you to pray for peace and reconciliation as situations cause concern and great suffering.... I think of violence against Christians in Iraq and India," he said.

The provincial governor for the Mosul area, Duraid Kashmula, called it the worst violence against Christians in five years.

"The (violence) is the fiercest campaign against Christians since 2003," Kashmula told AFP on Saturday. "Among those killed over the past 11 days were a doctor, an engineer and a handicapped person."

The flight came as Chaldean Archbishop Louis Sako last week called on the US military as well as Prime Minister Nuri al-Maliki's government to protect Christians and other minorities in the face of a rash of deadly attacks.

In an interview with AFP, Sako called on the Americans to do more to protect Christians and other minorities.

He said that since the US-led invasion of 2003 more than 200 Christians had been killed and a string of churches attacked, with the violence intensifying in recent weeks, particularly in the north.

It was now time for Maliki's Shiite Muslim-led government to deliver on repeated promises to do more to protect Iraq's minorities, Sako said.

"We have heard many words from Prime Minister Maliki, but unfortunately this has not translated into reality," he said. "We continue to be targeted. We want solutions, not promises."

There were around 800,000 Christians in Iraq at the time of the US-led invasion, a number that has since shrunk by around a third as the faithful have fled the country, the archbishop said.

In March, the body of the Chaldean archbishop of Mosul, Paul Faraj Rahho, 65, was found in a shallow grave in the city two weeks after he was kidnapped as he returned home from celebrating mass.