Pius XII and the "Black Legend" 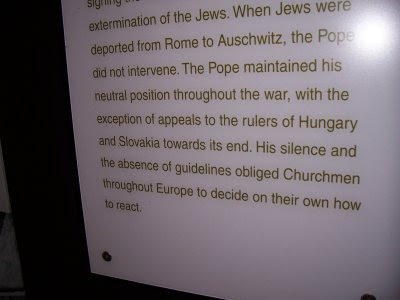 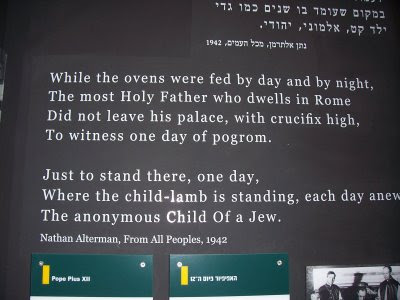 Orbis Catholicus carries these pictures and this explanation:

When you visit Israel's holocaust memorial museum, the Yad Vashem, this is what you're greeted with as seen above. Photos are not allowed to be taken, and nobody outside is meant to see these pics. When you complain you get a smirk from the museum custodians.

Early this week the Chief Rabbi of Hyfer who had spoken at the Synod said he wouldn't have gone if he had known that it would have coincided with the 50th anniversary commemorations of Pope Pius' death. A little strange to think the author of Divino Afflante Spiritu, should not be lauded at a Synod on scripture.
Hindsight is not the best way to judge any historical figure, but the silence of Pius XII, does need explanation. The Chief Rabbi of Rome became a Christian after the war, really because of the Pope, he took the name Eugenio in his honour. At the time of his death he was judged a "Righteous Among the Gentiles", because of the thousands of Jews hidden by the Church, throughout Italy at his direct intervention.
A few years ago it was suggested that the KGB had engineered the "black legend" of Pope Pius XII, though perhaps its roots lie a little closer to the Church.

Sandro Magister has an interview with Paolo Mieli, a student of the great historian of fascism Renzo De Felice, and the director of the leading Italian newspaper, "Corriere della Sera." Mieli is of Jewish family, with relatives who died in the Nazi concentration camps. Mieli absolutely dismantles the "black legend" weighing against Pius XII, whom he calls "the most important pope of the twentieth century."

And it was in 1963 that a twofold revision of Pius XII's role began taking hold. One of these was malicious – inside the Church itself – and contrasted Pius XII with the figure of John XXIII. It was a devastating operation: John XXIII was treated as a pope who had demonstrated a sensitivity during the second world war that Pius XII had not. This is a very bizarre idea. And between the lines of the invective against Pacelli, it seems to emerge that the pontiff has been made to pay for his anti-communism. In reality, Pius XII was a pope in line with the history of the Catholic Church in the 20th century. If one reads what he wrote or listens to the recordings of his speeches, one realizes how he also expressed, for example, criticism of liberalism. I mean that he was not at all a pawn of anti-communist Atlantism.

"A pawn of anti-communist Atlantism"

Well, I have seen that charge levelled at John Paul II, and even heard mutterings about the admiration between Pope Benedict XVI and President George W. Bush.

The excellent Sandro Magister (thanks to Father for the link) deals very successfully, I think, with the "black legend".

Opposition to Pius XII emerged long after the war. Not surprisingly, his critics included scholars of the notorious "school of Bologna". And the article in the Jesuit "La Civilta Cattolica" provoked an uproar at the time.

I'm not clever at reading the tea leaves of Italian politics (which is why I read the blogs of the experienced Italian journalists), but his support for the Christian Democrats in 1948 clearly won him many enemies. He has been made to pay the price for his vigorous anti-communism.

The anti-semitic charges have become something of an old chestnut. The Jews he saved, and who honoured him, are dead. Subsequent criticism of him is something of an insult to their memory, too.

I can't help feeling the policy of the Church and the German bishops at the time of the rise to power of the National Socialists is a somewhat different question from the role of the wartime Pope, though the two questions are not unconnected.

On the whole, I would say beware the difference between history and revisionist history.

Politicians will always change History to suit themselves,some things we are never allowed to forget,11th September is one of them.

Blowing up The King David Hotel in Jerusalem when hundreds of innocent people were murdered has been forgotten.

When the Catholic Church says something about the goings on in the so-called civilised world some old propaganda nonsense has to be dug up.

If we hear enough of it,often enough we will have to believe it.

It was tat damnable Hochhuth and his play the Deputy that poisoned the well. Hochhuth WAS a communist pimp.

It is truly disgusting to see these lies posted by Jews in memory of their dead. It shows a total disrespect for their memory and the memory of Pope Pius XII who did so much to save them. Certainly there is misinformtion concerning Pope PiusXII. However, I find it very very hard to believe the Jewish authorities do not know the truth.

Why didn't the rabbi also condemn the US government? In the late Thirties a ship bearing 900 Jews was turned away from US ports and returned to Germany, condemning them to certain death. US immigration was closed to Jews at that time. If he is judging Pius XII by contemporary standards, then he should do the same thing to the US government. Fair is fair.

Aracoeli makes a most valid point. You can't apply the hindsight of a later generation to an earlier historical period without running the risk of being unhistorical or anachronistic.

The nations of the civilised world did nothing, but they didn't know in the 1930s (how could they ?) the sheer scale of the horrors to come in the 1940s. In any case, with all the social problems caused by Depression, they had fish of their own to fry. This is a historical fact, and no good historian can reckon without the facts.

And when they went to war, it was not because of the Nazi persecutions. It was because of the territorial aggression of the Third Reich, and in the case of the USA, the Japanese attempt forcefully to establish hegemony in the Pacific and the Far East.

This was the milieu in which Pius XII had to operate.

Hence the uproar over the article in La Civilta Cattolica which was, frankly, anachronistic. (It also seemed to me to be trying to conflate two different historical episodes in one story which was a very unhistorical thing to do).

In 1939, the positions of Pius XI & XII were rendered complicated by the attitude of the 'Allies' toward the Nazi government: In 1938 both anti-clerial France and indifferent GB had exchanged Catholic (and Jewish) Czechoslovakia for an extended peace. Chamberlain (under pressure from pro-war elements at home) then offered, in the spring of 1939, a bizarre guarantee to a neo-fascist, junta of anti-semitic (but Catholic) Polish generals that could never be realistically honored. A reality understood by anti-war elements such as Anthony Eden and Lord Halifax for as late as 1940 Halifax was looking to establish peace with Germany but the pro-War elements won out and the bombing of Berlin began. The Poles (confident of Anglo-French support) had been making things even worse by mistreating and persecuting the German minorities of Danzig prior to the German invasion.

Poland, of course, would remain unliberated until 1989 but its present government just like Georgia's is repeating the same mistakes of the past by their current attitude to Russia.

Now you are Pope for a day in 1939/40. What are you supposed to do or say? Remember, we have not even considered the two superpowers in waiting who would emerge from the chaos for at that point it really gets complicated!

I forgot to add in my comment that at the outbreak of hostilities, the Holy See had adopted neutrality.

It is difficult to see how Pope Pius XII could operate openly without compromising the neutrality of the Holy See. What else could he do, therefore except act clandestinely ? At risk was not only the sovereignty of the Vatican City State, but also the papacy itself with untold consequences for the Catholic Church. Not an easy situation to find oneself in !