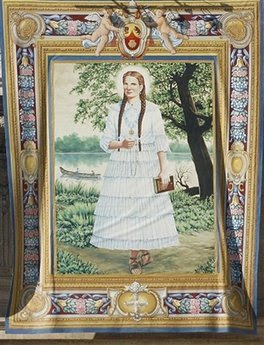 NARCISA DE JESÚS MARTILLO MORÁN was born in 1832 in the hamlet of St Joseph in Nobol, Daule, Ecuador. The Dominicans had been looking after the parish for almost three hundred years. She was the daughter of Peter Martillo and Josephine Morán, landowners, modest people with a deep faith. Her father, who had a lively intelligence and was a great worker, amassed considerable wealth.
He was very devoted to the future saint Marianna of Jesus and Saint Hyacinth of Poland who is venerated fervently throughout the province of Guayas. They had nine children, who grew healthy and strong. Narcisa was the sixth. In 1838, when she was six, her mother died. Helped by a teacher and an older sister she learnt to read, write, sing, play the guitar, sew (a skill she really mastered), weave, embroider and cook. She had great qualities, with a particular bent for music. Often, her prayer became song, and her song was intimate and devout, reaching the heart of Him who well deserved it, as a song which she loved to sing in her youth said.
She had a clear perception of her call to sanctity, especially from when she received confirmation, aged seven, on 16th September 1839. She grew into the habit of withdrawing frequently in a small wood near her home to give herself freely to the contemplation of divine realities. The tree of Guayabo, near which she prayed, is today the destination for large pilgrimages. She turned a small room in her house into a domestic chapel. She decided to imitate Saint Marianna of Jesus, identifying with the vocation of a victim. She undertook a demanding path of penance to unite herself more closely with the suffering Christ and cooperate in the redemption of the world. She helped with the domestic chores and out in the fields. She was a young, thoughtful, lovable, happy girl with a sweet and peaceful character, extremely good and obedient, generous, compassionate towards the poor, very devout, loved by all the neighbours. She was a very attractive young woman, blonde with blue eyes, tall, strong and agile. She showed herself to be an excellent catechist. She could not do without communicating the fire of divine love to her family and to the children of the neighbourhood.
In January 1852 her father, a good man, died. Narcisa, who was then 19, moved to Guayaquil to stay with a very well-known family who lived near the cathedral. She stayed in this city until 1868, except for those months she lived in the city of Cuenca. She moved house a number of times to preserve her privacy and to dedicate herself with greater freedom to prayer and penance, earning her living by doing tailoring work. She helped the poor and the sick. She was docile to the instructions of her spiritual directors and shared ideals, and sometimes a house, with the Blessed Mercedes of Jesus Molina. Driven by a desire for greater perfection, and advised by a Franciscan religious, she set off in June 1868 for Lima (Perù) and lived as a lay member in the Dominican convent of Patrocinio, founded in 1688, in the area where Saint John Macias used to graze his flock. The Lord favoured her with extraordinary gifts, and showed her how pleasing her life was, in the midst of trials of the spirit.
Towards the end of September 1869, she had high fevers. Medical remedies could do little, but she kept up her normal rhythm of life, ending with a novena and the celebration of the Eucharist, with great joy, dressed in white, on the solemnity of the Immaculate Conception of Mary, 8th December 1869, the same day on which Blessed Pius IX opened in Rome Vatican Council I. At the end of the day she took leave of the sisters, saying she was going on a journey very far.
This was taken as a joke, but not long after, one of the sisters, charged with blessing the cells, noticed a splendour and a special scent in Narcisa’s cell. The community gathered and they saw that she was dead. She was 37 years old.
Afterwards, it became known that she had made a private vow of perpetual virginity, poverty, obedience, enclosure, eremitical life, fasting on bread and water, daily Communion, confession, mortification and prayer. All these vows she kept faithfully. She lived in continuous union with Jesus Christ. Her mortifications were very severe. She carried constantly on her body the signs of the Lord’s crucifixion. She had a firm faith and admirable hope. The doctors were amazed that she could have lived so long with so little food. Her body remained supple for a long time and from it came a pleasant scent, and in front of it many graces were granted. The city of Lima acclaimed her as a saint, as did the people of Guayaquil and Nobol. The Dominican Sisters of Patrocinio guarded the memory of her virtues and her tomb with great veneration until her body, practically incorrupt, was transferred to Guayaquil in 1955. The documents of the diocesan process of canonization were handed over to the Congregation for the Causes of Saints in 1964. Pope John Paul II beatified her on 25th October 1992. On 22nd August 1998 they dedicated a shrine in her honour in Nobol, where her incorrupt body is at present. Devotion to the "Niña Narcisa" shows the spontaneous identification of ordinary people with this woman from the Ecuadorian coast. The example of her life, pure and pious, of work and apostolate, sends out a very topical message. 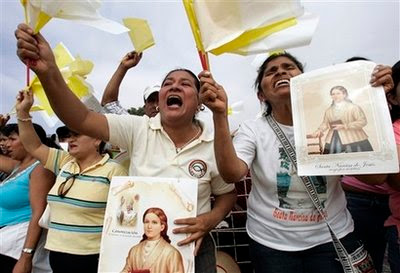