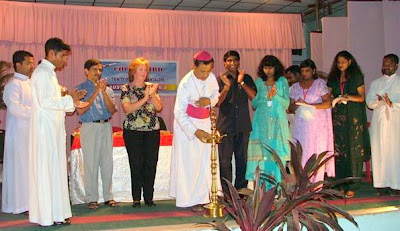 I have a few contacts with India and from what I hear the Church there seems to have more than a few problems. One hears of seminarians unable to explain the the Holy Trinity in terms beyond 1+1+1=1. Indian priests I have heard preach, certainly seem ungrounded in theology and scripture. An orthodox Indian theologian I know often complains those who he teaches, and who are ordained, seem to be more Hindu than Christian. His diaconate year students he says would be unable to explain theologically why they were Catholics.
One Indian bishop I met complained to his host an English parish priest, "your congregation don't respond very well." He replied, "My Lord, they do if you use the texts in the Missal". The Bishop then suggested that as a Bishop he was empowered to change anything in the Missal he chose. Later at a reception in his honour he seemed to indulge in rather suggestive flirting with some young married women. Apparently many of his priests complained about his tyrannical rule of his diocese.
Another bishop I met here in England was part of a ecumenical group following a deluded Orthodox prophetess. The parish priest had to threaten him with deletion to Rome in order to prevent him giving communion to Calvinists, Baptists, Anglicans and others.

I am afraid from my experience the following is of no surprise.

Following an investigation conducted by the papal nuncio and the metropolitan bishop, Pope Benedict XVI on Thursday suspended Bishop John Thattumkal of Kochi, a Latin-rite prelate in the southwestern Indian state of Kerala. Last month Bishop Thattumkal had adopted a 26-year-old woman to whose visions he has attributed the discovery of financial irregularities in his diocese. source

Oh dear.
And I thought things were bad in England & Wales.

Things won't get better in India until the Church there is led by sound bishops, and the clergy and people receive sound catechesis. (Now this does begin to sound like England & Wales.)

As I've stated on my blog: NO + Modern Catechesis + Liturgical Abuse = mess.

I do know an Indian priest, who does have his way with Liturgical Abuses.

Let us pray for the Church in India.

I was about to write a sound-of-head-hitting-wall post about the level of theology at my university, but now I see I should thank the providential stars rather than wail. Seraphic has had similar flirting stories about African seminarians (possibly priests, I can't quite remember). Did not some recent papal thing address the African churches saying more or less that they should be very careful about discerning vocations, as the priesthood is often sought for prestige?

At my theological alma mater the students still hooted with laughter over two Romanian Greek Catholic seminarians who had been chucked out in their first year. They'd spent all their time from arrival at place of study in the gym or playing in table tennis tournaments, or lounging about. Before it became okay again to be Greek Catholic in Romania, they'd been leaders of their local communist youth movement!

I suppose in every country there are different "false attractions" attached to the priesthood.

Well Peter who do you think taught them? I am betting English priests.

I've just left a comment on Deb's (UKOK) blog about her Indian friend and warned that some parishes are kooky- and then I come here and you show just how!

In places it looks worse than here!!

"seem to be more Hindu than Christian."

This points to a failure to correctly understand and implement what is meant by inculturation, no surprise if the men leading the formation have fell into the error of believing all cultures are equal, something that is rife in the Church today imo, the Jesuits been a prime example.

Yes, it is a cause of concern. I know that Wrexham diocese is quite dependent upon Indian priests. However, they source them from the Carmelites and they seem very sound.
I once invited an Indian diocesan priest studying in Rome to supply for me, and discovered that he had been pestering parishoners for donations.

Alex Benziger,
Your comments were very interesting but extremely long and detailed. I have read them but I think they will not be helful for most readers.
Why not start your own blog?

The problem with the Indian church stems from false ecumenism: since the council, it has become unfashionable to preach that the Catholic faith is truth and evangelise people, especially the Hindu's in India. Instead, priests now tell Hindus to be better Hindus and that Catholicism is just another form of the one belief system to reach "God". I have heard this with my own ears. The only people truly preaching the gospel in India are the SSPX.

What a terrible responsibility these priests and bishops bear, when they have to face God. Pray for them!

I realise that this is not really relevant to this discussion, but I thought you might like to know that in February 1953, Pius XII elevated four of his nuncios to the Sacred purple: Gaetano Cicognani, Spain, later Prefect of the Sacred Congregation for Rites and pro-Prefect of the Supreme Tribunal of the Apostolic Signatura; Pietro Ciriaci, Portugal, later Prefect of the Sacred Congregation of the Council; Francesco Borgongini Duca, Italy, later an official of Propaganda Fide and who died in the following year; and, Angelo Roncalli, (France).

When the list of the 24 cardinals-elect was announced on 29 November, 1952, among their number was Carlo Agostini, Patriarch of Venice (since February 5, 1949). Sadly, His Excellency died unexpectedly (on 28 December) of complications from Parkinson’s disease before receiving his red hat. In order to achieve his purpose of having a full contingent of 70 cardinals, Pius added to the list India’s Valerian Gracias, then aged 52 years, Archbishop of Bombay.

Cardinal Gracias thus became India's first ever cardinal and Angelo Roncalli became Patriarch of Venice rather than the incumbent of a sinecure to see out his days.

Well, my PP here in Middle England invites all dominations to recieve communion regularly. The bishop seems to be aware of it and lets him get away with it in his own parish, but recently interveened to prevent him celebrating Mass in the local Anglican church.

Dear Father,
I am sending these posts for your kind information. Today I sent another one letter . Please if you possible the matter may be referred to the Holy See.
Thanking you
G. Alex Benziger