Celibacy is the answer and the remedy 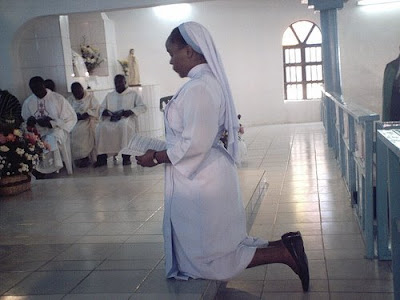 Brighton always strikes me as being like first century Corinth, pretty superficial for the most part. Corinth was a seaside holiday resort where practically everything went. The converts Paul addresses are from a highly charged sexual community. There also seems to be a strong element of what we would call "new age" spirituality amongst its inhabitants. Corinth like Brighton seems to be a complex of small communities with their own agendas, it is mirrored in the factionalism of the Church, which Paul addresses.
Paul when he deals with these problems of this community, focuses on the centrality of Christ, he demands cohesion but what I suspect what would have left his readers rather ashen faced would have been his demand for celibacy, and for those who are going to "burn" with passion, the only alternative, which is less perfect than celibacy, is marriage.
Most commentators nowadays suggest Paul's challenging teaching is simply because he understood Christ's return to be imminent, I am sure that is true but that tends to be a bit simplistic and to gloss over both the remedial aspect of his teaching and the challenge it demands.
I can't help but think celibacy is the real answer today for our city's problems.
Nowadays it is quite normal for bishops and priests to not make it seem to be something radical, though they are committed to celibacy personally. If we just appear as pious bachelors or spinsters then we do celibacy a serious disservice. Today, in Brighton, and the rest of the world too, celibacy has to be presented with a new vigour, because as in Pauls day, for a Christian celibacy or marriage are the only possibilities. All this is just an introduction to this rather interesting article.

(CNA).- Manfred Lutz, a psychiatrist with the Congregation for the Clergy, has responded in an extensive article to those who consider celibacy not to be "natural" and explained that the discipline is not only necessary for priests and religious to fully live out their vocations, but that it is also a "provocation" to a superficial world that does not believe in life after death.

In the article published by the L'Osservatore Romano, Lutz commented that celibacy represents "a permanent protest against collective superficiality." It proclaims that "the earthly world, with its joys and sufferings, is not all there is."

One who cannot renounce the exercise of sexuality is not capable "of joining in a marital union" either, Lutz continued. Looking upon women as "the object of satisfaction of a personal impulse plays a key role in the criticism of celibacy," he stated. Lutz also noted that there are even times when spouses cannot "fully exercise their sexuality, as in the case for example of a temporary illness or a permanent handicap. In these cases, a spousal relationship that is truly profound is not destroyed but rather enriched.”

“In the same way,” Lutz continued, “the issue of celibacy should not be made into an issue merely of genital sexuality, but rather should be seen as a determined form of relationship that allows for a profound relationship with God and fruitful relationship with the persons confided to the pastoral care of the priest."

Celibacy, Lutz argued, enables a priest to engage more intensely in spiritual direction. "It is not true that spiritual guidance for couples would be better if it were given by spouses. Such a guide always runs the risk of unconsciously reliving the experiences of his or her own marriage and of transforming his or her own emotions into actions through a psychological mechanism without reflection."

"For this reason," he continued, "such a guide needs solid monitoring to prevent this from happening. On the other hand, a good spiritual guide has considerable existential experiences with many married couples, and therefore can reach out to the most difficult cases. This explains, for example, the surprising fruitfulness of the writings on marriage of that great shepherd of souls, the Servant of God John Paul II."

Noting that celibacy is not for narcissists who are always looking to be the center of attention, Lutz recalled that the priest "should always be interested in other human beings and their misery, he should forget about himself and should make visible through his words the splendor of God before his own sufferings."

Even so, I left with the problem, like most celibates, priests or lay people, of how to live out one's celibacy. I am sure somehow it has to be done in the context of close friendships and a loving community but if we turn again to St Paul, it is done in the context of the vision he is always presenting of what we have become in Christ.
at October 21, 2008

Surely celibacy is remaining unmarried for a religious end, chastity is abstaining from sexual activity outside marriage. Celibacy implies chastity, but married people can be chaste without being celibate.