Thousands of Christians flee Iraqi city amid ‘campaign of liquidation’ 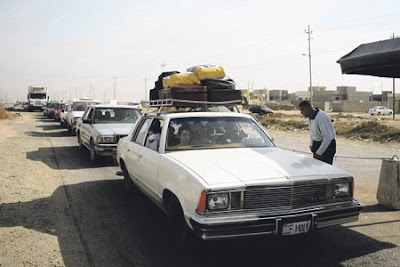 Catholic Herald
Around 4,000 Christians have escaped Mosul in northern Iraq to neighbouring villages, creating a potential humanitarian nightmare as winter approaches. Many left without any possessions after receiving written threats, and militants blew up at least three Christian homes after chasing out the owners. The Iraqi government has sent 2,500 additional police to the city to protect churches.

The refugees now face a bleak winter without any food or shelter in what aid workers are calling a “desperate” situation.

Some 25 families fled in one day last week followed by another 50 the next day. It turned into an exodus after 13 Christians were murdered, including a father and son and a disabled man in his twenties. Most victims owned or worked in shops, suggesting a campaign to break the economic strength of the Assyrian Christian community.

The exiles have moved north and east to the villages of the Nineveh Plains, the last stronghold of Iraq’s Christian minority. In one Christian village, Qaraqosh, more than 1,000 refugees are now staying in schools and churches.

However, Qaraqosh and the others villages in the area are already overwhelmed with Christian refugees from the fighting elsewhere in the country, and Christian charities are preparing emergency food, medicine and shelter.
at October 18, 2008

Hopefully they will end up in Sweden where they will help to stiffen up the Catholic church there except the buildings are getting too small for the growing congregations.

Immigrants seem to be welcome if they are Christian.

All I can suggest is a donation to Aid To The Church In Need.

Thank you for sharing this with your readers and thus keeping the plight of our brothers and sisters in Christ to the fore.

We will especially pray for these persecuted brethren in such trials.

Thankyou for telling us about this, Fr Blake. To watch or read the mainstream media, you'd think the only world crisis was financial.

This is a 21st Century EXODUS. I can only pray that this lot have access to the New Passover.

We must pray that these refugees have priests with them. Manna in the desert.

I have also made enquiries as to why this is not being covered on the national broadcaster's news service. I am not holding my breath.

It's not being covered widely because they are Christians. Same with all the reports Fr. has mentioned re: India, etc.

I despair too, that today's youth are not often told of he suffering Christians take for the sake of Christ in other parts of the world. When I was young, in our Catholic schools we were constantly made aware that in the communist countries and elsewhere, children like us were being persecuted for the faith.

A while back one of our servers was complaining about having to serve an extra Mass. I pulled him aside and told him that I was sad to hear him say that, and to serve the Mass and think of all the people in the world who weren't allowed to go to Mass without suffering, and he was so very lucky to stand near the priest without treat of violence to him and be witness to God coming to us in the sacrament, in the flesh. It pained me to hear him complain, and it pained me to wonder if I had made an impact or not. This is a lad I've known literally all his life. I honestly don't know if the schools and parents just don't impart that urgency anymore. [I guess form my own background, I my grandmother's relations were behind the iron curtain, as well as a married in aunt's family.]

It pains me how attendance at Mass has dropped so much, when it's so easy for most of us to go ... and to think there are millions who would crawl on their knees to be able to go to church without being persecuted.

I'm sorry if I've rambled, but this issue pains me deeply.

Another tragedy resulting from the Bush & Cheney war-mongering.

These criminals must be made to answer for their crimes.

Flogging off the public sevices to bunch of greedy gits and flogging off the social housing was all the idea of that MAD-WOMAN who took charge in '79.

Another of her stunts was deregulating the financial sector.

It is going to take years and a whole lot of tears before we get back to normal.