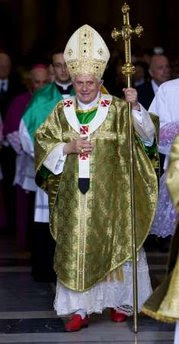 The Holy Father opened the Synod this morning, here is a summary from AsiaNews of his sermon:
The pope opened the 12th general ordinary assembly of the synod of bishops today at the Basilica of St. Paul’s Outside the Walls. The location is unusual - is the first time that the opening of such an assembly has not been held at St. Peter’s - and signifies the connection with the Pauline Year, during which the synod is taking place, under the theme of “The Word of God and the life and mission of the Church,” of which the apostle to the Gentiles was one of the leading missionaries. Benedict XVI then illustrated during the Angelus the work of the 253 “Synod fathers.” 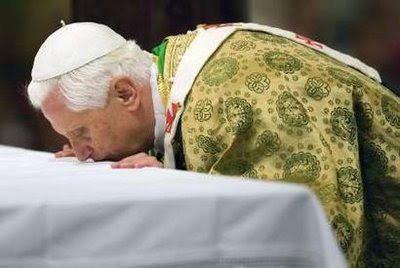 Looking at the Gospel parable, Benedict XVI noted that “this page of the Gospel applies to our own way of thinking and acting; it applies especially to those peoples who have received the proclamation of the Gospel. If we look at history, we are forced to recognize that it is not rare for inconsistent Christians to be cold and rebellious. As a result of this, although God never fails his promise of salvation, he has often had to resort to punishment. It is spontaneous to think, in this context, of the first proclamation of the Gospel, which gave rise to Christian communities that at first were flourishing, but later disappeared and are now remembered only in the history books. Could not the same thing happen in our time? Nations that at one time were rich in faith and vocations are now losing their identity, under the harmful and destructive influence of a certain modern culture. There are those who, having decided that ‘God is dead’, declare themselves ‘gods’, believing themselves the sole creators of their own destiny and the absolute owners of the world. In casting off God and not awaiting salvation from him, man believes that he can do whatever he likes and set himself up as the sole measure of himself and his action. But when man eliminates God from his horizon, is he truly more happy? Does he truly become more free? When men proclaim themselves the absolute owners of themselves, and the sole masters of creation, can they truly build a society in which freedom, justice, and peace reign? Does it not instead happen - as daily events abundantly demonstrate - that there is the expansion of arbitrary power, egoistic interest, injustice and exploitation, violence in all of its expressions? The result, in the end, is that man finds himself more alone, and society is more divided and confused.” 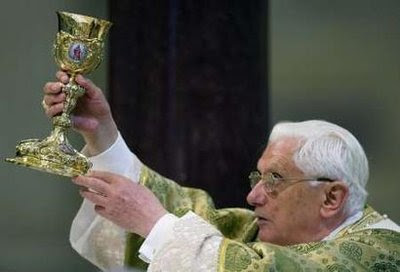 But “there is a promise in the words of Jesus: the vineyard will not be destroyed. Although he leaves the unfaithful keepers of the vineyard to their fate, the owner does not abandon his vineyard, and he entrusts it to other servants, who are faithful. This indicates that, if in some regions faith becomes weak to the point of disappearing, there will always be other peoples ready to accept it.” 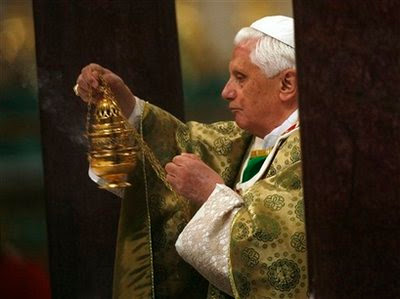 “The message of consolation that we take from these biblical texts,” the pope concluded, “is the certainty that evil and death do not have the last word, but it is Christ who overcomes in the end. Always! The Church does not tire of proclaiming this Good News, as is taking place now, in this basilica dedicated to the apostle of the Gentiles, who was the first to spread the Gospel in the vast regions of Asia Minor and Europe. Let us renew in a significant way this proclamation during all of the 12th general ordinary assembly of the synod.” “May the Lord help us to examine ourselves over the next weeks of the synodal work, asking ourselves how we can make the proclamation of the Gospel increasingly effective in our time.” 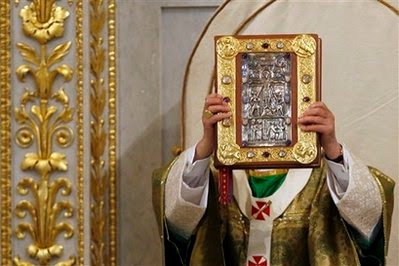 I love the Pope's words, taken from Christ's promise in the gospels : "The vineyard will not be destroyed." That's all that matters, really.

I hope while this is going on someone does something Cardinal Albert Vanhoye who linked to this event said the following:

""After the Council the application of the Psalms to Christian life was facilitated by the omission of the things that were furthest from the Gospel."

"It seems opportune and useful from the point of view of the acceptance of the Word of God to omit things that have been corrected by Jesus."

For a cardinal to endorse omitting part of the word of God is unbelievable I was shocked when I read his comments to Zenit.

My goodness, God punishes his wayward children! I have not heard that in all my life.