Another Reaction to the Financial Crisis 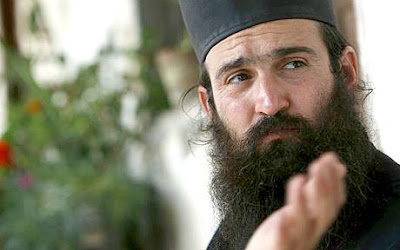 A former Wall Street broker has swapped Manhattan for a monastery in Bulgaria to become an Orthodox monk.

Hristo Mishkov had a successful career as a broker on the Nasdaq stock exchange in New York until he decided to give it all up to return to his native Bulgaria. His radical change of circumstances may start to look appealing to the tens of thousands of finance sector employees who face the bleak prospect of losing their jobs.
Exchanging tailored suits and expensive shoes for a cassock and sandals, Brother Nikanor, as he is now known, believes Wall Street and the City deserve all they get as the credit crunch bites deeper and the global financial system goes into meltdown.
"It is right to see people who consume more than they deserve shattered by a financial crisis from time to time, to suffer so that they can become more reasonable," he said.
He has scant sympathy for bankers and brokers around the world who are at risk of redundancy.
The collapse of banks and investment firms was a necessary correction because they had grown greedy, he said.
"Many people ... in the world do not realise that they have not earned the food they eat, that they take without giving," said Mr Mishkov, 32, who worked for Karoll, one of Bulgaria's leading brokerages.
"But if someone consumes more than they have earned, it means someone else is starving."
His colleagues were stunned when he decided to become a monk, but he had made up his mind to seek spiritual well-being rather than material wealth.
"Everybody can be a good broker but this does not bring much benefit for the world," he said.
"We always search for happiness in the outside world, in material things, which makes us constantly unsatisfied, angry with ourselves and the world."
Where once he milked the money markets, Mr Mishkov now wakes at dawn to attend to a herd of cheese-producing buffalo in the 12th century Tsurnogorski monastery in which he lives, 30 miles west of the Bulgarian capital, Sofia.
But he has not entirely turned his back on his past.
When he became a monk five years ago he retained just one luxury – a mobile phone – and has used it to raise hundreds of thousands of pounds from former trading colleagues and Bulgaria's wealthy to rebuild the dilapidated monastery, which was used as a labour camp during the communist era.
from the Telegraph
at October 03, 2008

Some of them may have to do some "time"before running off to the Monastery.

Do they let usurers join the monastery these days?

I can't help thinking about today's saint (it's Saturday here)
St. Francis of Assisi.
He did something similar, didn't he!

Is that Robert De Niro?