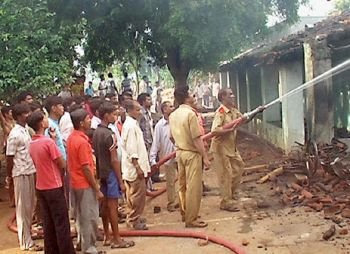 The government of violence-hit Orissa has refused to compensate for destroyed churches, saying such a move would violate the country's secular policies.

The Orissa state government advanced this argument in an Oct. 20 affidavit to the Supreme Court, which is hearing a plea seeking compensation for about 100 churches and prayer halls destroyed in Hindu radical violence against Christians.

Archbishop Raphael Cheenath of Cuttack-Bhubaneswar filed the plea to seek 30 million rupees (US$612,445) in compensation to help rebuild churches and places of worship destroyed during rioting that began on Aug. 24.

The Orissa government's refusal came two days after Prime Minister Manmohan Singh promised financial help to rebuild the churches when he met with Reverend Samuel Kobia, who had called on him. The general secretary of the World Council of Churches revealed the promise at a press conference in New Delhi after the Oct. 18 meeting.

The Orissa affidavit by Tarun Kanti Mishra, the state government's principal secretary, said: "It is against the secular policy of the State to pay any compensation to religious institutions."

It also said Archbishop Cheenath's demand was "not acceptable" to the state, and that the violence, concentrated in Kandhamal district, reflected ethnic discord rather than religion.

A Maoist group claimed responsibility for the killings of the Hindu leader, who opposed conversions to Christianity, and his four associates. However, Hindu radical groups blamed the murder on Christians.
read more here
at October 23, 2008

I would stongly urge our bishops to speak out on this issue and to express the solidarity of Catholics in the West with our persecuted co-religionists in Asia.

I know the Cardinal has expressed sadness at recent events in India and elsewhere, but I think our spiritual leaders should go a step further and be spearheading intensified prayer efforts for our fellow Catholics in Asia.

Surely this issue should move straight to the top of the "social justice" priority list in our dioceses? At the moment, the English Church seems to be more concerned with CO2 emissions than the martyrs who are dying as we stand idly by.

They have already betrayed their secularist position by not defending the rule of law in the case of a specific religious group. The least they could do it put back the buildings that were destroyed and help the people who have suffered from their neglect. Shame on the government of Orissa, shame.

Are they not contradicting themselves, since the promise was given. (but then again, we're not apart of the WCC, nor should we be)

That being said, the least the government can do is assist in putting the Churches back together again...we should also do what we can to help our brethren in the East in this dilema