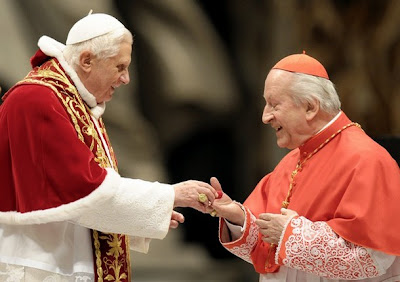 Here is an extract from a speech by Cardinal Rode, the Prefect for the Congregation for Religious. He is that Cardinal who opened the Jesuit's General Congregation by calling them to obedience.

In the last forty years, the Church has undergone one of her greatest crises of all times. We all know that the dramatic situation of consecrated life has not been marginal in this state of affairs. In practically all Western countries, observers note that most religious communities are entering the end-game of a prolonged crisis whose outcome, they say, is already determined by the
statistics.

In many of these Western countries, religious have lost hope....

Under the umbrella of “consecrated life” and behind the statistics there lies a variety of situations.

First, there are many new communities, some better known than others, many of which are thriving and whose individual statistics are the reverse of the general trends. The ones I can think of that are generally attached to the Old Rite.

Second, we have older communities that have taken action to preserve and reform genuine
religious life in their own charism; they are also in a growth mode, contrary to the general trend, and their median age is lower than the overall average for religious. In the UK the Dominicans seem a good example, Pluscarden too.

Neither of these two groups sees “the writing on the wall” in the sense that observers of the general trends use it; on the contrary, the future looks promising if they continue to be what they are and as they are.

Third, there are those who accept the present situation of decline as, in their words, the sign of the Spirit on the Church, a sign of a new direction to be followed. Among this group there those who have simply acquiesced to the disappearance of religious life or at least of their community, and seek to do so in the most peaceful manner possible, thanking God for past benefits. The majorityof communities of women are in this situation.

Then, we must admit too, that there are those who have opted for ways that take them outside communion with Christ in the Catholic Church, although they themselves may have opted to “stay” in the Church physically. These may be individuals or groups in institutes that have a different view, or they may be entire communities. How many religious communities have put off Christ and taken on some vague New Age "spirituality", or become submerged in a politics that sees the Church as their enemy?

Finally, I would distinguish those who fervently believe in their own personal vocation and the charism of their community, and are seeking ways to reverse the trend. In other words, how to achieve authentic renewal. These may be whole institutes, or individuals, pockets of individuals
or even communities within institutes....

It showed itself in multiple ways: In talk about holiness that is totally divorced from fulfillment of Christ’s law and the concept of grace. In minimizing sin. In the acceptance of the world as it is, with no need of conversion. In taking the world as the criterion according to which the Church ought to be reformed. In a notion of apostolate or ministry that consists in being at ease in the world rather than changing it. In rejection of authority, and especially divinely constituted authority, hence the rejection of the magisterium and all canonical and disciplinary ordering in the Church....

Towards the end of the Second Vatican Council, I was in Paris finishing my doctoral thesis on “miracles of the modernist controversy.” At that time in France there was a pervasive atmosphere of enthusiasm for the Council as the press and other media presented it, which was a partial image of the Council as a “victory of the liberals over the conservatives.” This is why Pope Benedict calls for a return to "the documents" of the Council rathe than the false "spirit" of the Council.

When I returned to Slovenia I found that the communist regime was isolating the Catholic faithful, suffocating public expression of the faith and reducing it to a merely private affair. I found a faithful people within a society shaped by the ideology of materialism. I soon realized that what I brought with me from my studies in Paris was of very little use for my pastoral work. I needed to be close to the people and to respect the traditional ways of expressing of their faith. I learned so much from the Christian faithful! They taught me to love the Church, to respect the Pope and the bishops in communion with him. We can learn a lot by trying to fulfill the expectations of lay people who are faithful, I wonder if in the recent past we have listened too much to those who have lost faith.

The great lesson I learned from that experience was this: The religious who secularized consecrated life were not doing so for the sake of the faith of the people of God. It was not the good of God’s people that they were seeking. Rather than God’s will, what they were seeking was their own.

Religious life, being a gift from the Holy Spirit to the individual religious and the Church, depends especially on fidelity to its origins, fidelity to the founder, fidelity to the particular charism.
Fidelity to that charism is essential, for God blesses fidelity while he “opposes the proud.” The complete rupture of some with the past, then, goes against the nature of a religious congregation, and essentially it provokes God’s rejection.
Fulltext of Rodé's talk

What a great post Father. I can not count the times when I have heard decay and barrenness described as "the work of The Holy Spirit". Painting bad as good in a feeble attempt to circumvent any responsibility for action. I pray our Bishops read this and stir themselves to act.

I have reached the time in my life when I know there are people out there who think the unspoken truth in both spiritual and secular matters but I spend my life thinking "Is it just me?". Clearly it isn't.

God bless the man in the red hat.

The Cardinal certainly 'gets it! - though many modern religious don't! But is it not history repeating itself?

St. Francis was charged by Our Lord with repairing His Church. He started with nothing - literally - and look what the Franciscan Orders became. But even there, over the centuries, there were reforms and "getting back to The Rule" - most recently Fr. Groeschel's Friars of the Renewal.

I think my two aunts (RIP) would not recognize the Sisters of Mercy Order they joined over 80 years ago - in Australia and the USA respectively.

All religious orders need to "get back to The Rule".