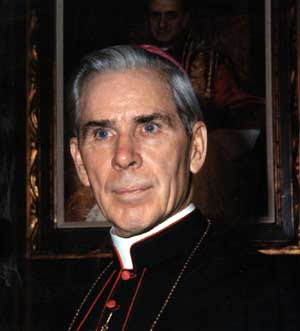 "The press and sometimes theologians said that the Holy Father should never have issued the letter because it divided the Church. Of course it divided the Church as Elijah divided those who had to choose either Baal or God; it divided the Church as the Lord divided it: 'He that gathers not with Me, scatters.' Certainly, it thinned the ranks of the Church just as God's order to Gideon, trimmed his army from 30,000 to 10,000 and from 10,000 to 300 to do battle with an army of about fifty thousand. Humanae Vitae, quite apart from its teaching, is perhaps the most important Church document in modern times. It enabled the Church to know how many would follow the flesh instead of the spirit."

Yep, it is a great post. Humanae Vitae is wonderful and so beautiful.

I have been watching recently on You Tube some of the old TV broadcasts by Fulton Sheen. They are as fresh and relevant as ever.

So too, of course, is the brilliant and prophetic "Humanae vitae" of Paul VI.

have you seen this?


Okay, I thought it was funny. I don't know how true, haven't been checking, but funny.