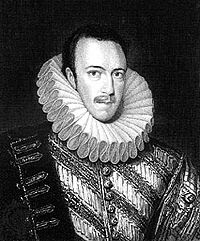 Today in our diocese is the Solemnity of St Philip Howard, the Co-Patron of the diocese.

St. Philip, born 28th June, 1557, was thirteenth Earl of Arundel. His father Thomas, IV Duke of Norfolk, was beheaded by Queen Elizabeth in 1572 for involvement in the affair of Mary, Queen of Scots. Philip Howard, baptised by the Archbishop of York in the Chapel of Whitehall Palace, had Philip of Spain as one of his godfathers.

Philip married Anne, daughter of Lord Dacre of Gilsland, when he was fourteen. He graduated at St. John's College, Cambridge in 1574 and was about eighteen when he attended Queen Elizabeth's court. Handsome, high-born, quick-witted and articulate, he neglected his wife and God but the turning point came in 1581 when he was present at a disputation in the Tower of London between a group of Catholic prisoners, Fr. Edmund Campion, Jesuit, Fr. Ralph Sherwin, Priests and others. These humble suffering Confessors awakened Philip's soul and he returned to Arundel to think about reconciliation with the Catholic Church, which he knew meant death.

He was reconciled in London by Fr. Weston, a missionary Priest, and shortly after sought religious liberty abroad. He was betrayed by a servant and apprehended at sea. On 15th April, 1585, he was lodged in the Tower and after countless interrogations, a year later was examined before the Star Chamber, found guilty of treason, fined £10,000 and committed to prison at the Queen's pleasure.

With the defeat of the Spanish Armada in 1588 anti-Catholicism swept the country. Philip was tried again before the King's Bench and falsely charged with praying for a Spanish victory and again found guilty. His sentence: to be hanged, drawn and quartered.

Thereon began his long term of imprisonment, never knowing from day to day which would be his last. Each day he spent several hours in prayer and meditation; he was noted for his patience in suffering and courtesy to unkind keepers. Weakened by malnutrition and not without a suspicion of having been poisoned, he died on 19th October, 1595. He was 39 years old and had spent the last eleven years of his life in the Tower of London.

Written on the step before the Shrine is this inscription: "The more affliction we endure for Christ in this world, the more glory we shall obtain with Christ in the next." This is a translation of the original Latin cut by St. Philip over the fireplace in the Beauchamp Tower, which visitors to the Tower of London can still see:

In 1971 his remains were brought from the Fitzalan Chapel in Arundel and enshrined in The Cathedral,

He was one of 40 Welsh and English Martyrs who died between 1535 and 1679. Probably best known among them are the Jesuit Edmund Campion (executed Tyburn 1581), Ambrose Barlow (Benedictine, executed Lancaster 1641), Cuthbert Mayne (diocesan priest executed in Launceston in 1577), Margaret Clitherow (executed in York in 1586) and Welsh priest John Kemble (executed in 1679 at the age of 80). The process of their canonisation was first begun as early as 1874. 136 martyrs were beatified in 1929 and Pope Paul VI announced in May 1970 that 40 of them would be canonised later that year.

Heyyyy... he shares my birthday!