At last, the Pope speaks 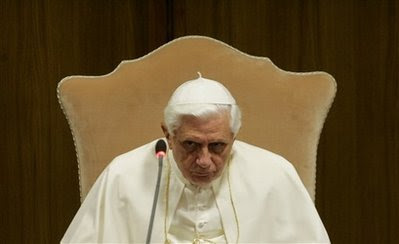 One of the great problems throughout the 20th century has been liberalism or relativism, which I suppose are just slightly more polite - and maybe less emotive ways - of speaking about the heresy of Moderism.
One aspect of the Church's life it has been touched by more than any other is how scripture and theology relate. Ultimately can we trust the Bible.
The man or woman in the pew, after hearing it for half a century still has serious problems with understanding basic statements like "Love your neighbour" or "You shall not commit adultery". Amongst our Protestant friends, rather than being easier it is more difficult, take the prohibition on divorce for example, here even American fundamentalists, search for an ecclessial gloss which ameliorates the Lord's harshness, as too do the Orthodox of course, and most Catholics put it down to the Church's teaching, rather than the Lord's.
Possibly that can be lived with, Catholics are not biblical fundamentalists after all. For us the Creeds are the first and foremost documents, as far as the Creeds are concerned we are fundamentalists.

For many of Catholic biblical scholars of the 60s, 70s, 80s, 90s their work seemed very much at odds with the faith we profess. If one wants to disover an understanding of the divinity of Christ, his virginal birth, his resurrection and his ascension biblical scholarship of his period is unlikely to provide help.
It is this problem that Joseph Ratzinger has devoted his life to, most notably in the Dogmatic Constituition on the Word of God of Vatican II, which he seemed to have played a large part in developing. Jesus of Nazareth, written not as Pope but under his own name, is I suspect, a "how to book" of scriptural exegesis; how to read, how to teach it, how to understand it.

I was expecting the Synod to deal with this, apart from scratching the surface so far it hasn't, not until today when the Pope spoke. see here

"[S]ince Holy Scripture must be read and interpreted in the sacred spirit in which it was written," the Council text says, "no less serious attention must be given to the content and unity of the whole of Scripture if the meaning of the sacred texts is to be correctly worked out. The living tradition of the whole Church must be taken into account along with the harmony which exists between elements of the faith."

Frankly, where the conclusions of a biblical exegete, however fine his mind is, however eminent his name is as a biblical scholar, contradict, or at odds with, the divinely revealed truths of the Catholic Church, then I will always believe the the latter.

I really like the quote that you put up. I used to be a fundamentalists and converted to Catholicism because I started reading and view the bible as a whole book, not disjointed verses.