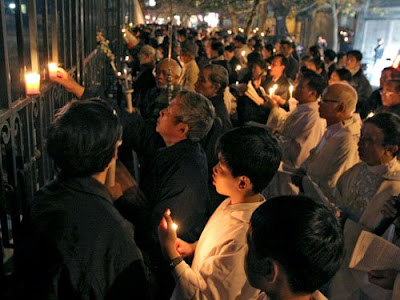 Human Rights Watch has called on the Vietnamese government to release Catholics arrested for holding peaceful prayer vigils in Hanoi and hold accountable police and others responsible for attacking parishioners. The protesters have been calling for the return of church properties confiscated by the government.

In a statement yesterday, HRW also urged the Vietnamese government to end the harassment, threats, and restrictions on the movement of the Archbishop of Hanoi, Joseph Ngo Quang Kiet, who has publicly defended the rights of the Catholic protesters and visited the families of arrested parishioners.

"This is the harshest crackdown on Catholics in Vietnam in decades," said Elaine Pearson, deputy Asia director of Human Rights Watch. "Sadly, religious repression and violent crackdowns by the Vietnamese authorities against peaceful protesters are nothing new."

Vietnam has not seen such large numbers of Catholics participating in mass public protests since the 1950s, nor has the government responded to Catholics so violently in recent decades.

Vietnamese authorities have recently used tear gas and electric batons to disband the peaceful Catholic prayer vigils in Hanoi, and bulldozed properties considered sacred to Vietnamese Catholics. Hundreds of unidentified thugs, some in the blue shirts of the Communist Youth League, have harassed, cursed, and spit at parishioners and destroyed church statues. On September 19, 2008, authorities detained and beat an American reporter covering these events. As many as eight Catholic parishioners participating in the vigils have been arrested since the latest round of protests began in mid-August.

"Silencing the voices of Catholic parishioners by beating, harassing, and arresting them is yet another demonstration of Vietnam's intolerance of dissent and freedom of religion," Pearson said. "Even senior religious figures of officially recognized churches are severely harassed."

The two Hanoi properties in dispute are the site of the former Nunciature (a Vatican diplomatic mission), and the Thai Ha Church of the Redemptorists, both of which were confiscated in the mid-1950s. Construction workers, backed by hundreds of police officers, bulldozed church buildings at the site of the Nunciature on September 19, 2008.

Public expression of land grievances are escalating throughout Vietnam, from the Mekong Delta to the northern highlands, with religious leaders and their adherents at times involved in the peaceful protests.

Prayer vigils conducted in December 2007 and January 2008 by Catholic parishioners in Hanoi seeking the return of the disputed properties died down earlier this year when government authorities reportedly promised to return the properties. Months went by, however, without any action, spurring thousands of Catholics to join fresh prayer vigils in August and September to press for return of government-confiscated church land.

On September 21, 10,000 Catholics gathered in prayer outside Hanoi's main St. Joseph Cathedral to protest the demolition of church buildings at the nearby Nunciature. It was the largest public protest by Catholics since 1954.

Hanoi authorities targeted for harassment Archbishop Kiet after he publicly defended the prayer vigils. Catholic sources in Vietnam report that Vietnamese authorities have placed surveillance cameras outside his residence and are monitoring his phone line. Government-orchestrated mobs have assembled outside his gate shouting anti-Catholic slogans and calling for him to be removed from his position. The archbishop has limited his activities outside his residence due to security concerns.

The government is also carrying out an intense smear campaign against Archbishop Kiet in the state-controlled media, alleging that he has committed illegal and unpatriotic acts by "instigating parishioners in order to sow divisions" through protests that the government claims are threats to public safety and national unity.

On September 23, the president of the Hanoi People's Committee (a governmental authority answerable to the Vietnamese Communist Party) sent a letter to the Vietnam Conference of Catholic Bishops calling for the "severe punishment" and transfer of Archbishop Kiet, and accusing him and four priests at Thai Ha parish of "inciting riots, falsely accusing the government, disrespecting the nation, breaking and ridiculing the law and instigating others to violate it."

In response, the Vietnam Conference of Bishops issued public statements in defense of the archbishop and priests, raising concerns about religious freedom, the right to property, the government's monopoly over the media, and other human rights issues in Vietnam

Roman Catholicism is one of six officially recognized religions in Vietnam. Catholics constitute the country's second-largest religion, after Buddhism, with more than 6 million adherents. Following the communist takeover of North Vietnam in 1954, the government seized many properties from private owners, pagodas, and churches, including the Catholic Church.

Ties between the Vietnamese government and the Vatican were severed in 1975 following the reunification of Vietnam. While diplomatic relations have not yet been renewed, the Vietnamese prime minister met with the pope in Rome in January 2007. In June 2008, a Vatican-Vietnam working party was established to improve relations.

One of those is Roman Catholic priest Nguyen Van Ly, a founder of the democracy group in Vietnam known as Bloc 8406, who was sentenced to eight years in prison in March 2007 for conducting anti-government propaganda under Penal Code article 88.
source
at October 08, 2008

Communism is a false evil god. No wonder it wants no competition.