"I Hate Those Cartesians" 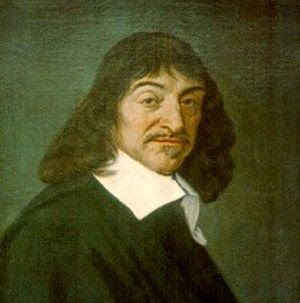 I it is always rather pleasing to be quoted, apparently I said this in a sermon.
Descartes's "Cogito Ergo Sum", I think therefore I am, is highly problematic.

If I am not very good at thinking, am I less?
If I don't think at all do, I cease to be?
If someone else doesn't think like me, are they less than me?

What about God,
If I don't think of Him, does he cease to exist?
If I am only conscious of some of His attributes, does He only exist in those aspects I am conscious of?

The tendency in thinking since Descartes is to place "I" at the centre of everything, it is ultimately solipsistic. Catholicism sees mankind in a totally different way "God is therefore I am", from this we understand that man is not the centre of the universe but contingent on God who is.
I think these two understandings of what a human being is, are at the heart so many of our modern problems. Within the Church it is at the heart of what might appear to be squabbles over liturgy, it is what lies behind Fr Z's phrase Save the Liturgy, Save the World. I see it behind the US election debate, Obama is a Cartesian. It is certainly there behind the abortion debate, a child exists, simply because the state acknowledges its existence. It is behind the religion versus secularist debate, and behind the increased conflict between the Islam and West.
at October 29, 2008

Yes, but where does Descartes come from? He didn't just pop out of thin air.

I share your concern, Father. (BTW, and not to be picky, has a stray "n" crept into the verb? Is it not "cogito"?)

Just putting out the feelers for a new concept in the debate of God/Science where a team can be chosen and the debate left to unfold can be seen at:

What do you think?

And that's the cleaned up version.

Is that a no vote then, Gem?

By the sound of Gem Fidel is right and there will be a Madwoman a heartbeat from the Presidency.

Oh, Nick. GOOD. We don't want the world to "like" us, we want it to FEAR us. But if Nobama loses, we'll be glad to wind him up and send his rear end to Europe where he belongs when he's not having tea with terrorists.

And frankly, there isn't a thing wrong with what I said about Nobama...except possibly his birth, which I think might be Kenyan. He hasn't exactly pulled out his actual long firm Birth certificate from Hawaii. He may be a Manchurian candidate. I wouldn't put it past the dirtbags he hangs with.

After the Middle Ages, as the modern scientific method was emerging, many of the foundations of the body of knowledge were being questioned, such as the Aristotelian underpinnings of medieval thought. Descartes was very concerned about this, and he wanted the foundation of our knowledge to be indubitable. If the foundation was firm and unquestioned, then anything that flowed from those premises would also be justified. His concern with empirical methods was that our perception of reality could always be wrong, we could be hallucinating or being deceived. So he wished to find a new path, through rational meditation, that would not be subject to the pitfalls of the empirical method and would be just as indubitable as sources of knowledge that rely upon deductive logic, such as mathematics.
Today most people have come to terms with the fact that there will always be a small sliver of doubt hanging over sources of knowledge that rely upon inductive knowledge, such as the empirical sciences. Using empirical data to test our hypotheses provides a way of calibrating our beliefs to the external world, which is the world we must live in. There will always be those that question whether they are the only ones who exist or if we are in the Matrix, but for the most part, we just try to take precaution about the possibility of being deceived by our senses, and we create many other methods, such as peer review and the ability to repeat the test of a hypothesis so that others can check the work of scientists. Unfortunately, as the empirical methods came to the forefront, many of the gems of Scholastic thought were ignored which tends to occur in these types of paradigm shifts in human thought.
However, Descartes’ reliance on rational deduction also allowed him to make what we might consider to be mistakes today, such as Cartesian dualism. Because of Descartes’ ‘I think therefore I am’ he came to the conclusion that he existed in some form. However, he now had a greater knowledge of his thinking faculties than the existence of his physical mind. So he separated the two, allowing the physical brain to exist while the ‘mind’ existed in a higher plane. This seems mistaken, if someone is hit with a bat in the brain, sometimes their mental state changes to, which seems to be good evidence pointing in favor of seeing the mind and brain being the same thing. With our empirical methods, we can never say with 100% certainty that something is ‘proven.’ ‘Proof’ is reserved for deductive logic, such as 2 + 2 = 4. The scientific method can only produce knowledge that is probably true, and that probability increases as more evidence points in favor of a hypothesis and does not falsify its predictions. While I would disagree with a Cartesian rationalist, I do not think they were crazy for attempting to create a solid foundation for our knowledge. I also would not say Obama is a Cartesian, Cartesians are concerned about the foundation of our knowledge being justified, which does not seem to concern Obama, as he willfully ignores what is painfully obvious through observation [empirically we understand that life begins at conception, and Cartesians would eventually reach this conclusion once they can find a solid foundation for the existence of external reality, which they find through the existence of a Perfect God (see my explanation below)], and through logical deduction, that either all humans have the same rights, or that some humans have different sets of rights. Philosophers such as Peter Singer are willing to question the premise of the dignity of human life, but Obama wants to have it both ways by ignoring what is inconvenient. This is not Cartesian.

“If I am not very good at thinking, am I less?”
- :) Whatever the quality of the thought that you do think at the very least provides evidence that you exist in some form, or at least something that is generating thoughts about yourself exists.

If I don't think at all do, I cease to be?
-Well, at the very least, if you do not think at all, you cannot contribute to a discussion about the foundations of philosophy and science. If you do not think, then you would not be concerned whether the justifications of our belief in your existence are indubitable or not.

What about God,
If I don't think of Him, does he cease to exist?
-After the Cogito, Descartes adds another premise; anything with a cause must be created by something greater than itself. This isn’t necessarily true, we can think of many instances where complexity arises from the interactions of simple components so that the ‘whole is greater than the sum of the parts.’ Perhaps in those cases, Descartes would say that the whole interdependent system and the processes that take place within it are greater than the final product. Descartes meditates on his own existence and his conception of a perfect God. He adds another premise that states that anything that we think about through clear and distinct perception is true, because this type of perception gives us new information about the essence of something, unlike empirical knowledge that can be doubted, or through the workings of the imagination, which are just a recombination of empirical facts. Since an existing God would be more perfect than just the idea, God must be the final cause of the idea of a perfect God. Because a perfect God exists we can be sure that reality (except for our fallible interpretations of it) does exist and our belief in it is justified. A perfect God would never deceive us by creating false ‘realities’ as that would violate the essence of a perfect being. So for Descartes, God’s existence makes the existence of the rest of creation, and our knowledge of it, potentially indubitable (we can always misinterpret reality on our own.)
-If you accept his premises, which are problematic, then you would immediately be led to the conclusion that a perfect God does exist. Remember, Descartes is only discussing whether our beliefs are justified. His logic, if correct, would allow us to have a high degree of confidence in God’s existence, in fact, according to Descartes, this knowledge lays an indubitable foundation for the rest of our knowledge.