Between the Anvil and the Hammer 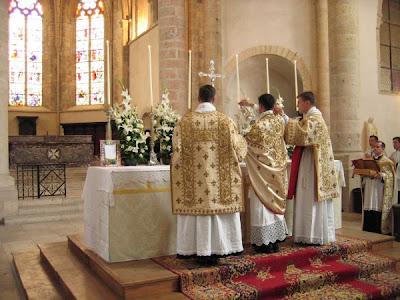 I remember an old parish priest doing the normal parish priestly thing and moaning about his bishop, or more accurately moaning about all those high blown adjectives that trip off the toungue like a litany to define his function as Liturgist, Catechists, Administrator, Legislator, Judge. "In my day," he said, "the bishop was between the anvil of his diocese and the hammer of Rome". Vatican II has emphasised the role of the role of the bishop, whereas Vatican I emphaised the role of the Pope, the problem is that it is easy for a Bishop to see himself as a being above the Presbyterate and over the Church. Vatican III will deal with the role of the priest of course, and Vatican IV .... 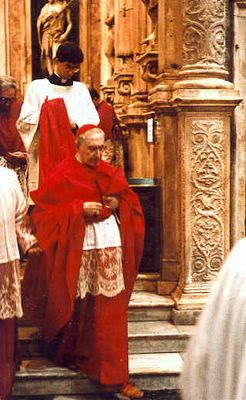 One of things I like about the older rites is the dependance of clergy on their assistant ministers, the vestments of the Pope for example the long faldo and and papal cope meant he couldn't even move without assistance, the same with a cardinal or bishop wearing a cappa. At High Mass Pope, Bishop or Priest were all dragged about the altar by their vestments, without assistants they could do nothing. I am sure it was all meant to underline the importance of the particular cleric but it underlined too tha 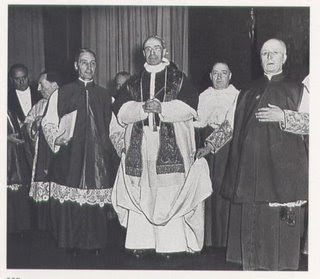 t he did nothing on his own, his very movement was dependant on others, it was always collegiate.
Our present liturgical practice is much more individualistic. This morning I celebrated Mass without a server, forty years ago, though it happened, it would have been rare and considered an abuse. Nowadays it would possible to celebrate for what passes as "High Mass" with just a priest and a congregation, and most probably a reader. In the past High Mass would have entailed priest deacon, subdeacon, MC, two Acolytes, thurifer and crucifer, and of course a choir. What I am saying is that as important as the celebrant was the older liturgy emphasised his function within the the Church, his dependance on others. Post-concilliar liturgy is in comparison much more individualistic.

We have some spectacular Solemn Masses this weekend. I believe to be televised on EWTN. Never mind the priests..must put on my glad rags!lol

Nice looking liturgy but that altar they are using ought to go, so that they used the original one. It is a right lump stuck in the way.