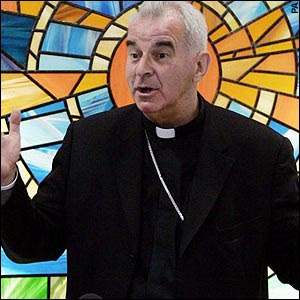 Cardinal O’Brien spoke at a Glasgow SPUC conference yesterday following Tuesday’s vote on the Human Fertilisation and Embryology Bill. which legalised scientists to carry out research on human-animal hybrids.


He said: "The harsh reality is that the noble words of so many high blown declarations have been matched with a barbaric indifference to the rights of the unborn.”

"SPUC has worked tirelessly in Scotland and the UK to fight the evil of abortion for almost 40 years but we must recognise that what really can be described as the forces of darkness have distorted the laws and consciences in our nation and that our situation is now worse than ever."

Cardinal O`Brien told his audience in Glasgow: "I called on our Members of Parliament to search their hearts and their consciences over the summer months to decide whether or not the value of human life really matters or is it simply one more commodity to be cast aside in our throw-away society.”

"We now know that final votes on the Human Fertilisation and Embryology Bill taken last Wednesday, while the question of abortion was not debated or voted on - which in itself may be considered a small mercy - the reality remains that the vote was a tragedy for our country.”

"As a direct consequence of this legislation the value of human life will be eroded even further in the United Kingdom."
at October 26, 2008

Hurrah for Cardinal O' Brien!
Thank God that the Catholic Faith has such a voice in Scotland.

I wish our Cardinal would do the same.

The queen refused to intervene.
What a horrible waste of lives this all is.
I'm glad Cardinal O'Brien has spoken so well on the matter.

Ok so what do we do about it?

Cardinal Ratzinger[God and the World, 2000].

"God will react against a last crime, a last criminal self-destruction of the human being. He will resist the degradation of the human person through the breeding of slave-people. There is a last boundary that we cannot cross without becoming the destroyers of creation itself."

Cardinal O'Brien is right. We have crossed a very serious boundary. I think our political leaders have set the course for a severe chastisement of this country and her people. Many Rosaries needed to open hearts.

The same unspeakable monsters responsible for 2 million abortions in the last 10 years now want EUTHANASIA to control the growth of older people who are in the way.And they never st op moaning about immigrants doing the work.

You really couldn't make it up,we are living in a lunatic asylum.

"God will react against a last crime, a last criminal self-destruction of the human being. He will resist the degradation of the human person through the breeding of slave-people. There is a last boundary that we cannot cross without becoming the destroyers of creation itself." Pope Benedict XVI (speaking when he was Cardinal Ratzinger)

If this bill gets passed, how long before a tidal surge takes the House of Commons? I know as Catholics we're not into "Smote them, Lord" prayers, however...for how long will Our Lord allow the height of His Creation to be pillaged by Man for Man's senseless purposes?