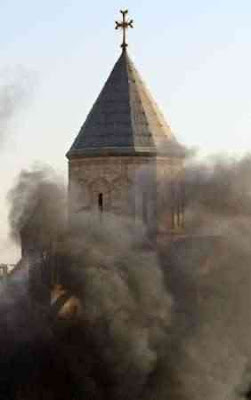 After the murder of their Archbishop, numerous other killings, abductions, bombings, rapes , forced conversions, threats, acts of extortion, Assyrian Catholics are flooding out of Mosul.
I received this email from Tim Shamoon

The silence that has greeted the ethnic cleansing of the Christians inhabitants of Mosul has been nothing short of disgraceful and scandalous as far as the main stream media is concerned it has past them by for more pressing matters like Madonna’s second or is it third divorce? Thousands of children and the elderly face bleak winter sleeping in tents, refugees in their own country.

The spokesman for Iraq’s government recently described the Christians of Iraq who are currently living in Iraq as “Expatriates” it was not a slip of the tongue or a mistake. It was deliberate and calculated it also had the full blessing of the Office of the Prime minister of Iraq and it was above all said to see what reaction it would draw. NOTHING was the answer, the Americans who run the Green Zone stood and watched from the side lines. Let me make it clear that the USA has taken in more than 13,000 Iraqi refugees from all sections of Iraqi society this year alone so I am not saying that the USA has not tried to help refugees from Iraq, but what we want is protection in our own land and not to be driven out of it.
We are desperate for help so if possible please lobby your members of Parliament also if you can please sign a petition on the Downing Street website http://petitions.number10.gov.uk/ChristiansofIraq/
and please support the Charity Iraqi Christians in Need http://www.icin.org.uk/

by donating what ever amount you can which will go directly to help the people most affected. If any reader of this message does not live in the UK and want to help then please if you can make a do nation to the above mentioned charity.

Please do not take this as an attack on other faiths or other ethnic groups within Iraq or anywhere else for that matter it is merely a plea for help for a group of people who feel abandoned and forgotten. By the way Mosul has had people of different faiths living within it for over one thousand years in complete peace and harmony and I sincerely hope that those days will return one day soon.

Thanks for your time
Tim Shamoon

Why we should have a military order still, Christians still need protecting and always will.

It is astonishing that there are so few signatures on this petition. I really hope this will be promoted strongly and rapidly through the churches.

There is also a march next Saturday 1 November down Whitehall towards Westminster Bridge passing Downing Street.

The aim is to present a petition to the Prime Minister to request Her Majesty’s Government to act immediately to prevent further killings, persecution and eviction of the Iraqi Christians from Mosul and ultimately from Iraq.

Pauline,
I have tried a couple of time to sign, but havn't got the promised email

"It is astonishing that there are so few signatures on this petition."

Not really, since when did this government listen to the people?

The British couldn't even stop the terrorists from killing them in Iraq and had to pull out of Basra, they certainly aren't going to be able to do anything about this even if they wanted to, which they don't.

Catholics need to wake up and realise if they want anything doing they are going to have to do it for themselves.

Ms Deborah Haynes a reporter working for the Times of London (she is based in Iraq)wrote an excellent article on her Blog on the 27/10/08 about the plight of Christians in Iraq and here is the link to it.
http://timesonline.typepad.com/inside_iraq_weblog/2008/10/murder-and-fear.html