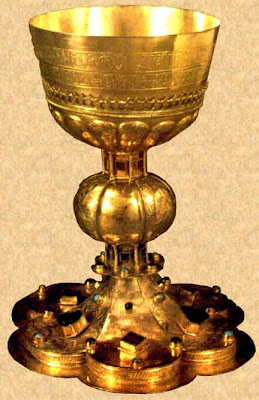 One of our deanery priests told us today that there is a particularly virulent form of the 'flu virus on its way which the standard vaccine won't deal with. Apparently the relevant department of the Bishop's Conference is going to issue instructions forbidding the reception of Holy Communion under both kinds.
at October 14, 2008

Could be good idea Father,I have had a bad kind of cold for about 10 days now and it is mainly a sore throat.

It is the downside of Public Transport and the "free Bus Pass" hasn't helped.

Indeed the Lord doth move in mysterious ways, his wonders to behold

(Sequence from the Feast of Corpus Christi)

Hope they won't backslide when the epidemic is over.

IMHO it should be recinded forever. There are far more reasons for not receiving under both kinds than for.

What possible 'other' reasons could there be for not receiving communion both kinds as our blessed Lord mandated? It is an abundant grace. I'm guessing communion under both kinds will change form temporarilly to use of intinction during any pandemic. Maybe the sign of peace will change to a hand wave to avoid bodilly contact?

Big Benny, the reason is here in the Sequence for Corpus Christi.

You can take St Thomas Aquinas on trust, he is a Doctor of the Church. The translation is a bit free.

Sion, lift thy voice and sing:
Praise thy Savior and thy King;
Praise with hymns thy Shepherd true:
Dare thy most to praise Him well;
For He doth all praise excel;
None can ever reach His due.

Special theme of praise is thine,
That true living Bread divine,
That life-giving flesh adored,
Which the brethren twelve received,
As most faithfully believed,
At the Supper of the Lord.
Sit laus plena, sit sonora,

Let the chant be loud and high;
Sweet and tranquil be the joy
Felt to-day in every breast;
On this festival divine
Which recounts the origin
Of the glorious Eucharist.

At this table of the King,
Our new Paschal offering
Brings to end the olden rite;
Here, for empty shadows fled,
Is reality instead;
Here, instead of darkness, light.

His own act, at supper seated,
Christ ordained to be repeated,
In His memory divine;
Wherefore now, with adoration,
We the Host of our salvation
Consecrate from bread and wine.

Hear what holy Church maintaineth,
That the bread its substance changeth
Into Flesh, the wine to Blood.
Doth it pass thy comprehending?
Faith, the law of sight transcending,
Leaps to things not understood.

Here in outward signs are hidden
Priceless things, to sense forbidden;
Signs, not things, are all we see:-
Flesh from bread, and Blood from wine;
Yet is Christ, in either sign,
All entire confessed to be.

They too who of Him partake
Sever not, nor rend, nor break,
But entire their Lord receive.
Whether one or thousands eat,
All receive the selfsame meat,
Nor the less for others leave.

Both the wicked and the good
Eat of this celestial Food;
But with ends how opposite!
Here 'tis life; and there 'tis death;
The same, yet issuing to each
In a difference infinite.

Nor a single doubt retain,
When they break the Host in twain,
But that in each part remains
What was in the whole before;
Since the simple sign alone
Suffers change in state or form,
The Signified remaining One
And the Same forevermore.

Lo! upon the Altar lies,
Hidden deep from human eyes,
Angels' Bread from Paradise
Made the food of mortal man:
Children's meat to dogs denied;
In old types foresignified;
In the manna from the skies,
In Isaac, and the Paschal Lamb.

Jesu! Shepherd of the sheep!
Thy true flock in safety keep.
Living Bread! Thy life supply;
Strengthen us, or else we die;
Fill us with celestial grace:
Thou, who feedest us below!
Source of all we have or know!
Grant that with Thy Saints above,
Sitting at the Feast of Love,
We may see Thee face to face. Amen

Here in outward signs are hidden
Priceless things, to sense forbidden;
Signs, not things, are all we see:-
Flesh from bread, and Blood from wine;
Yet is Christ, in either sign,
All entire confessed to be.


Henry, no one is suggesting that our lord is not entirely complete in recieving either form alone (although both bread and wine are needed for transubstantiation to take place). However, that is not an argument for not recieving under both kinds where possible. I believe even Fr Ray offers communion under both kinds on a regular(-ish) basis.

BB
"I believe even Fr Ray offers communion under both kinds on a regular(-ish) basis."
Every Mass actually, except one!

It's a nasty green hacking death flu. I was down with it for two weeks almost, and my voice still isn't back to normal. I'm ALL for doing away with the cup in flu season...I suppose if people really want Communion under both kinds, intinction's the way to go. And I could kiss whomever wants to do away with the handshake. Especiallly during flu season. I've never been a big fan. There's always that one idiot who will insist on coming to Mass and wiping out half the congregation.

We NEVER have Holy Communion under both kinds. If ever I was at a Church that did I wouldn't receive Our Lord's Precious Blood..it isn't necessary..receiving the Sacred host is completely Our Lord. It just gives more women a chance to stand at the altar looking important & with regard to the flu..well I've got man-flu at the moment!!
The sign of the peace is a total irritation..& is never given during our weekday Masses & at the High on Sunday the booklet explains..the person next to you..rant over!

Just to enlighten Jackie,those important looking women are important,they visit the sick & housebound,give Communion and do a lot of work in the community in their own free time.They do deserve some respect.