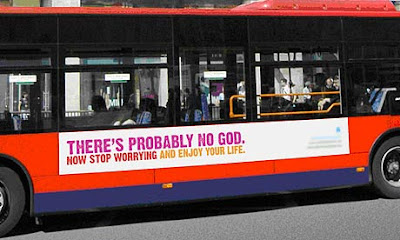 The British Humanist Society have just started their "Atheist Bus Campaign". Well done atheists, brilliant stuff. Dicky Dawkins and Poll Toynbee should be congratulated, at least by a Catholic Priest like me. I am going to get all my converts to read The God Delusion, partly because it is so second rate and badly argued it seems to provoke people into believing rather than disbelieving. I almost believe Dawkins to be a Christian, even Catholic, fifth columnist because as I have said before I don't believe in the God Dawkins doesn't believe in.

This type of initiative is worth supporting, it gets people talking about God and what atheism has to offer. I suppose I should suggest that for atheist to say, "There probably is no God" seems more like agnosticism than the full red blooded atheism of my youth. I hope they are not becoming flabby, maybe they are just a bit worried God may sue them so they are hedging their bets.
With so many passionate artists in the atheist camp you would think they could get something more visually exciting than this, come on Gilbert and George give them a hand.
The suggestion "Now stop worrying and enjoy your life", seems a bit empty, it just makes one want to ask: Why? especially if you have your money in Iceland. There must be an atheist who could come up with something better than this. The advert seems to indicate that atheism and perhaps atheists are, err...., just the tiniest bit dull. So do encourage them, Donate online now!

The Atheist Bus Campaign launches today, Tuesday October 21. With your support, we hope to raise £5,500 to run 30 buses across the capital for four weeks with the slogan: “There’s probably no God. Now stop worrying and enjoy your life.”

Professor Richard Dawkins, bestselling author of The God Delusion, is officially supporting the Atheist Bus Campaign, and has generously agreed to match all donations up to a maximum of £5,500, giving us a total of £11,000 if we reach the full amount – enough for a much bigger campaign. The British Humanist Association have kindly agreed to administer all donations.
With your help, we can brighten people’s days on the way to work, help raise awareness of atheism in the UK, and hopefully encourage more people to come out as atheists. We can also counter the religious adverts which are currently running on London buses, and help people think for themselves.
As Richard Dawkins says: “This campaign to put alternative slogans on London buses will make people think - and thinking is anathema to religion.”

Oh that Richard Dawkins. I've been praying for his conversion for almost 20 years. He's a really tough nutjob. I wish he was more rational and curious. It might make the Holy Spirit's job at little easier.

I would agree though Father. The "probably" is rather scary. As soon as you mention that, one automaticaly considers the other side of the equation.

Furthermore with the way things are going I do expect most people would be happier to think that God will look after them since no one else is stepping up to the plate.

Whoever does the ALPHA posters ( which I presume the BHS is alluding to on trains and buses) should use this Humanist bus ad for their next one:

There's probably no God left
(Except the one who still cares when your house gets repossessed.)

"There probably is no God"
Is that Anglican aetheism? Next they'll be making chutney for BHS fetes!

"Probably" sounds like the Carlsberg ad. It's a risky strategy if people start praying for them. Anyway, see Matthew 27:45-46, isn't Jesus saying much the same thing?

What do they mean "probably" ?
"There is probably no God." What sort of war cry is that ?

Many year ago, I heard a Catholic priest (just wanting to sound clever, I suppose,) begin the Lord's Prayer : Our Father, if you are in heaven..."

I say (in this context) : away with modifying adverbs, concessive subjunctives, etc., and say what you mean. No "grey areas", please. White does not equal black. Day does not equal night.
Truth does not equal falsehood.

And I know which one will triumph, eventually.

Your post is a humourous and level-headed response to this silly little campaign, Father. Well done.

We should be grateful to these agnostics for bringing the question of God's very existence to the minds and hearts of Londoners, as so many now unthinkingly and blindingly accept the atheist line so frequently trotted out. Given the use of the word 'probably', dear Richard et al can only sow the seeds of doubt in peoples minds. Worth every penny. I do hope this campaign runs for much longer.

I also agree with your prognosis on 'The God delusion' - I waited and bought a copy in a charity shop, as I wasn't able to countenance giving Dawkins even one penny in royalties. It is very amateurish and second rate, so quite disappointing really.

You've got to love the conditional "probably." (woudln't that mean there might be a God? (which we can of course prove objectively)))

I smiled when I read the bit that said 'thinking is anathema to religion'! In my experience, thinking and religion are two sides of the same coin...well, JP2 said it so well when he wrote that 'Faith and reason are like two wings on which the human spirit rises to the contemplation of truth; and God has placed in the human heart a desire to know the truth—in a word, to know himself—so that, by knowing and loving God, men and women may also come to the fullness of truth about themselves' Poor old RD will end up splitting himself in half trying to separate reason/thinking and faith/religion in his own person. Let's pray for help for him when that time comes.

PS Perhaps RD should read a bit more CS Lewis - might help him to write a bit less rubbish himself. In answer to 'There's probably no God' it might be good to have some [maybe adapted] bits of Puddleglum's answer to the Witch on the sides of buses:

Suppose we have only dreamed, or made up, all of those things—trees and grass and sun and moon and stars and Aslan himself. Suppose we have. Then all I can say is that, in that case, the made-up things seem a good deal more important than the real ones..... I'm on Aslan's side even if there isn't any Aslan to lead it. I'm going to live as like a Narnian as I can even if there isn't any Narnia.

[Puddleglum is my favourite character, as you can tell!]

i have just realised it's very difficult to spell the word atheist. i keep wanting to type athiest and the computer keeps correcting me.

On the matter of Richard Dawkins and the God Delusion, you might find this of interest:

Not wanting to do their work for them but perhaps a more intellectually honest slogan would be "There's no such thing as Truth and that's the truth!"

Is it just meant as a "wind up"? or what exactly is it all about?

If we ponder it long enough we will forget about what is really going on.

Tamsin Omond and all the other BARMY ENVIRONMENTALISTS will probably be able to explain it.

Change a word or two and it's fine:

"There is a God. now stop worrying and get on with your life"

is a pithy summation of one aspect of Christian life. Perhaps someone with a spraycan or a sticker easily produced on a PC could get creative in a traffic jam or down at the bus depot.

Dawkins and Toynbee are really quite funny if you don't take them too seriously. Yeah, go on Dick and Pol. You really stick to those Christians who disapprove of your radical views, your clothes and your noisy thrash metal records. Pathetic - permanent teenage rebels. Thank God most of us grow out of it

Flew is best at trashing dawkins though. Only a peer or one with greater knowledge can debunk the old fraud. Just when did a DPhil thesis on the pecking of chickens (I kid you not - The ontogeny of a pecking preference in domestic chicks.) qualify one to hold forth on the existence of God?

Sadly the media who know no better hang on his every word. Fools.

Is that all they can come up with? Rather pathetic! Looks like they are desperately trying to convince themselves!

Another short book well worth reading on this subject is "The Dawkins Delusion?" by Alistair McGrath who started as an atheist and scientist and is now Professor of Historical Theology at Oxford...he is confronting Dawkins in his own field!

The Dawins Deluision is a bit boring, Marysia. It could have been much stronger. I was a bit disappointed. (No change there, then.)

I think myself that as Catholics indeed as believers, having faith in God and saying "I believe..." is really just another way of saying there probably is a God. To paraphrase Pope Benedict the XVI I cant lay my faith on the table to prove to you that God exists, that's why its faith. besides I'm sure they think it makes them look open minded and intellectually mature compared to us narrow-minded god-bothers who drag our knuckles along the ground